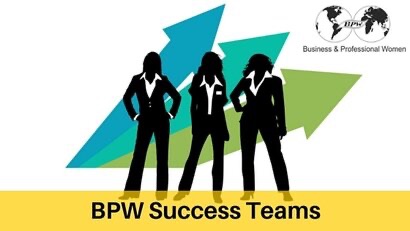 Do you have a personal goal?Do you want to change jobs, get a step ahead in your career, to start a new education or write a book? Whatever your goals are, you probably made some attempts already, but it took too long or you were not really moving ahead. Then joining a success team is a good solution for you.

A Success Team supports you to reach your goal
Success teams provide you with support and encouragement from other members and they also increase self-discipline by regular meetings. Thus initiating or participating in a success team will help you to reach your goal more efficiently. The team of 3 - 5 persons meets on a regular base (every 2 - 4 weeks depending on the team) for a limited time (6 - 8 months). The meetings have a certain structure and from meeting to meeting you move forward to your personal goal with the support of your team members.

How we developed the BPW Success Teams
The idea of success teams comes originally from Barbara Sher from the USA. She wrote books about it and installed success teams many years ago.
The idea was brought to Germany by Ulrike Bergmann, a BPW from Munich. Then BPW Frankfurt heard of it and started the first success team in September 2003. There were five members in the first success team, each with a different goal. As it was a great success and the idea fit extraordinarily well to the aims of BPW to support professional women, Frankfurt regularly started new success teams. Twice a year all club members are invited via e-mail. Every BPW who is interested may join and come to the kick-off meeting.

Sabine Schmelzer, formerly member of BPW Frankfurt, joined her first success team in March 2006. Her goal was to move to Switzerland, which she realized at the end of 2006. She took the idea with her to Switzerland and spread it there as well as in other countries she has contacts with.

What you need
Within the group you need trust, confidence and open-mindness from every member. There might come times where not everything is going forward as planned and then it will help to be able to talk about those experiences as well. There should be no competition among the members. There is no right or wrong way of doing things; every member chooses her own way and speed to develop her personal path towards her goal. The team offers a supporting environment which will help also through frustrating phases.

Each member should be committed to participate in the team for the period agreed at the beginning. Some might reach their goals earlier than others. But they should commit to participate in all the meetings until the very end. The members should be supportive and encouraging to help each other with their experience, knowledge and contacts. That's why you joined the success team in the first place. You will get support from the others in as much as you provide assistance to them.

We want to forward this excellent idea to all our BPW Federations and Clubs.